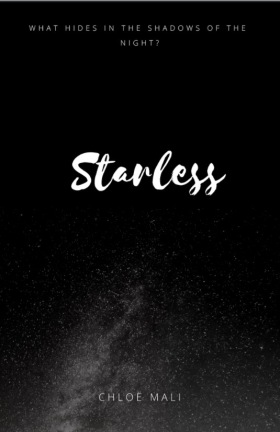 Starless is my main writing project. I’ve had the idea since September 2017, and started working on it for National Novel Writing Month (NaNoWriMo) that November.

Seventeen year old Natasha Flemming is more than content with her life in the City. She has everything a girl could ever want. Dresses, jewels, a huge fortune left to her by her dead parents….

But when a massive explosion drives her out of her lifelong home, she finds that she’s been ignoring the problems of the outside world.

It seems as if a lot of Natasha’s life has been a lie with sinister plots and strange notes appearing right and left. Who is behind all of this?

And is Natasha the one to stop the rapidly spreading evil?

Or does that job to the scarred, broken little girl hiding in the shadows of a starless night?

The hero of the story is Arendale Mayle, and if you ask anyone who’s read Starless, or even just roleplayed with Aren at any age, you’ll find that I’ve been very cruel to her. And I’m not even sorry. 🙂

I really can’t say much more without spoiling the story, though. If you want to read Starless, just let me know, and I can add you to the Alpha or Beta list. 😉

Other characters from this story (and the sequels) include Natasha, Tyson, Jenna, and Vi.

Posts relating to Starless and the Starless character cast:

How to Ruin Your Author- Character Takeover

I love comments, but please, keep them clean! Cancel reply

This site uses Akismet to reduce spam. Learn how your comment data is processed.